A 44-year-old man presented with bilateral progressive visual loss for 6 months, gradually worsening on the right eye over the last 4 weeks.

A 44-year-old Caucasian man presented with slowly progressive visual loss in both eyes, felt over a period of 6 months, worsening on the right during the last 4 weeks. He lives in a small village, with difficult access to ophthalmological care. On the first examination (2016), corrected distance visual acuity (CDVA) was 2/10 on the right (RE) and 7/10 on the left (LE). Biomicroscopy and tonometry were normal. Fundoscopy revealed signs of peripapillary chorioretinal degeneration and macular pigmentary changes bilaterally. Jagged irregular reddish lines of variable caliber, resembling retinal vessels, were visible radiating from the optic disc, though subretinally located (under the true vessels). A hard exudate was noticed in the right macula, raising the suspicion of choroidal neovascularization (Figure 1).

Figure 2: Late phase FFA showing peripapillary and macular bands of hyper- and hypofluorescence, consistent with a disruption in Bruch’s membrane and the RPE. On the RE, there is a subfoveal hyperfluorescent lesion, indicative of leakage and corresponding to a CNVM. 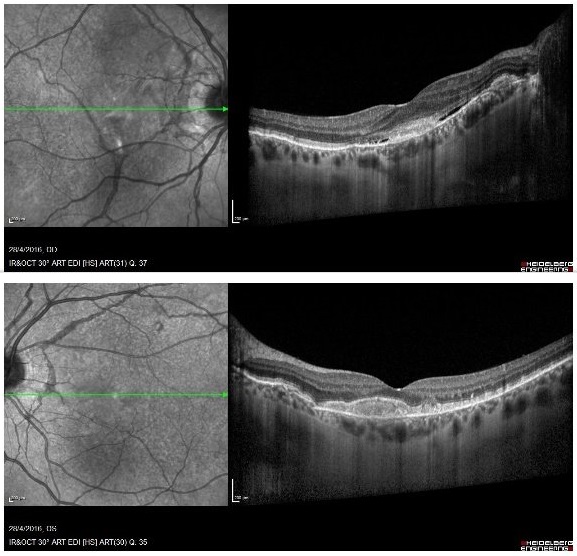 Figure 3: OCT shows peripapillary and subfoveal hyper-reflectivity on the RE, corresponding to the lesion, as well as macular subretinal fluid. Hyper-reflectivity is also observed on the LE, without the presence of fluid.

Based on the clinical and image findings, the diagnosis of angioid streaks with submacular choroidal neovascularization was established. Considering the ophthalmological status, the patient was started on intravitreal injection of anti-VEGF (bevacizumab) on the right eye only and scheduled for follow-up every 4 weeks. At 20 months of follow-up, with regular injections on the right, vision on the left eye decreased, too. Further multimodal imaging investigation with OCT and OCT-A (ultimately available) was conducted (Figure 5 top row), revealing CNVM also on the LE, so treatment was started on that eye as well.

Even though phenotype was suggestive of acromegaly for both the patient and close family members, extensive clinical investigation was inconclusive for systemic diseases. The patient has been followed-up for 5 years now and treated with intravitreal injections of anti-VEGF every 2 to 3 months, depending on visual status and signs of subretinal fluid or active neovascularization. Visual acuity (CDVA) has fluctuated from 4/10 to 6/10 on the right eye and 2/10 to 7/10 on the left. Present CDVA is 4/10 (right eye) and 6/10 (left eye). Present OCT shows bilateral macular hyper-reflectivity (Figure 4). With the advent of OCT-A, choroidal neovascularization (CNV) could be better demonstrated. OCT-A images depict persistent, prominent and possibly growing neovascularization (Figure 5), granting the need for continuous follow-up and frequent treatment. 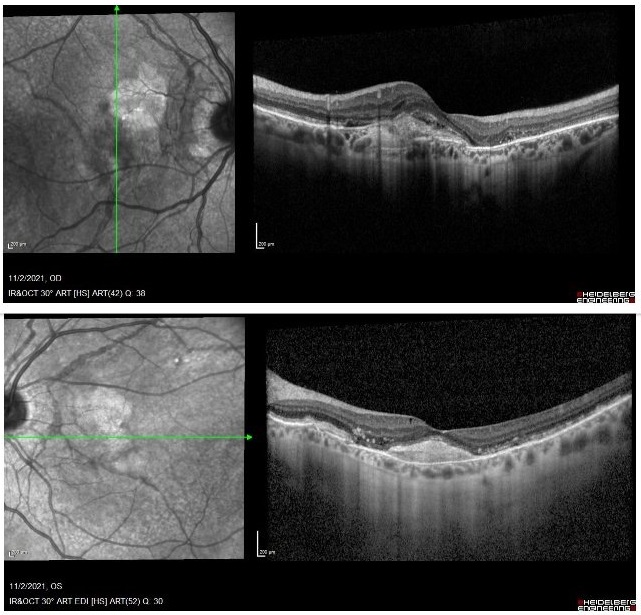 Figure 4: Recent OCT showing increased subfoveal reflectivity, partially due to scarring on the RE, with some possible intraretinal fluid. The picture on the LE remains stable with no fluid. 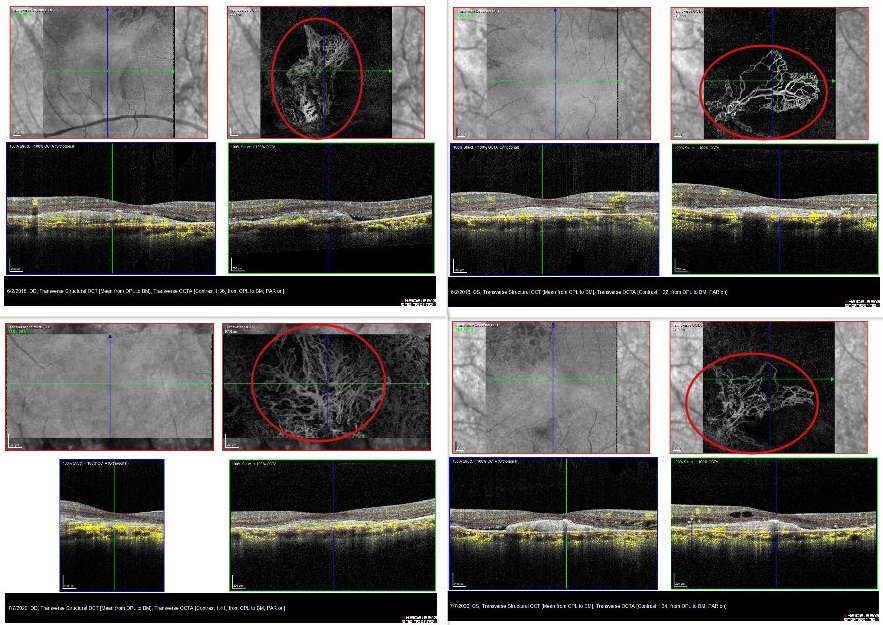 Pathologic and family history, ocular and/or systemic associations and multimodal imaging are necessary for the proper diagnosis and management of angioid streaks. Bilateral presentation (though with asymmetric fundus changes), location behind the equator, macular involvement and abrupt tapering of the vessel-like bands at their distal end (towards periphery) are characteristic of angioid streaks.

Angioid streaks, also called Knapp’s streaks or Knapp’s striae, are crack-like dehiscences of a degenerated and calcified Bruch’s membrane, typically forming around the optic disc and radiating from it. Aspect is usually linear or resembling blood vessels, hence the term angioid. Uncomplicated angioid streaks are asymptomatic. Number, width and length of the breaks may increase with age. Central visual impairment results from foveal involvement. Due to the fragility in Bruch’s membrane, subretinal bleeding may occur even after trivial trauma, and choroidal neovascularization (CNV) is a major complication, occuring in up to 86% of cases, with bilateral involvement in up to 71%. The age of onset is variable, but the condition most commonly presents in the mid-fifties. Caucasian individuals are most frequently affected. There is no gender predilection.

Angioid streaks may be idiopathic (up to 50% of cases) or associated with systemic diseases, such as pseudoxanthoma elasticum (PXE), Ehlers-Danlos syndrome, acromegaly, Paget’s disease of bone, hemoglobinopathies like Sickle cell anemia, different collagen disorders. The most important systemic association is PXE (Gronblad-Strandberg syndrome), an autosomal recessive disease featuring calcification and fragmentation of elastic tissues. Examination of family members may help find syndromic cases.

Multimodal retinal imaging is of primal importance in diagnosing, evaluating, and monitoring the disease. Subtle angioid streaks may be taken for regular vessels, especially in eyes with foggy media. Fundus fluorescein angiogram (FFA) shows window defects in the areas of angioid streaks and is very important to detect CNV. Angioid streaks may display hyperfluorescence, hypofluorescence or a mixed pattern. Optical coherence tomography (OCT) reveals the retinal/subretinal/sub-RPE changes of CNV and hyper-reflectivity at the Bruch’s membrane level due to calcification. EDI (enhanced depth imaging) OCT of eyes with angioid streaks and CNV usually reveals a thinner choroid when compared to angioid streaks without CNV. OCT-angiography (OCT-A) outlines CNV related to  the angioid streak. On indocyanine green angiography (ICGA), the streaks are usually better delineated as hyperfluorescent lesions.

In cases with subretinal hemorrhage and /or exudation, FFA should be performed to rule out CNV. If CNV is absent, the hemorrhage usually resolves on its own. If CNV is detected, intervention is mandatory. The management options have historically included laser photocoagulation, photodynamic therapy (PDT), transpupillary thermotherapy (TTT), and macular translocation surgery.  Anti-vascular endothelial growth factor (anti-VEGF) agents (ranibizumab, aflibercept, bevacizumab) halt both macular and juxta-papillary CNV, rapidly improving retinal anatomy and increasing or stabilizing visual acuity, and are the mainstay of ocular treatment. However, recurrence is common and serial treatment is often necessary.