A 53-year-old woman presented with gradual blurring of vision for 6 months.

A 53-year-old Caucasian woman presented with a complaint of progressively blurred vision over the course of 6 months and persistent floaters for 3 years, predominantly in her right eye. Her past medical history was unremarkable and systemic examination was negative for joint, skin, chest or bowel involvement.

Upon ophthalmic examination, corrected distance visual acuity (CDVA) was 4/10 and 6/10 in the right eye (RE) and the left eye (LE) respectively. There were no signs of inflammatory cells in the anterior chamber but there was moderate vitritis in both eyes. Intraocular pressure was within normal limits bilaterally. Fundoscopy revealed bilateral, multiple, scattered, yellow-white choroidal lesions predominantly located around the optic disc and mild disc swelling more noticeable in the RE (Figure 1). Fluorescein angiography showed bilateral diffuse vasculitis and extensive stippled hyperfluorescence resulting from fluorescein leakage at the RPE level, in addition to bilateral “hot” disc and leakage at the macula (Figure 2, top). Indocyanine green (ICG) demonstrated bilateral, multiple hypofluorescent areas, corresponding to the yellow-white lesions noticed during fundoscopy (Figure 2, bottom). OCT showed bilateral accumulation of intraretinal and subretinal fluid at the macula (Figure 3). 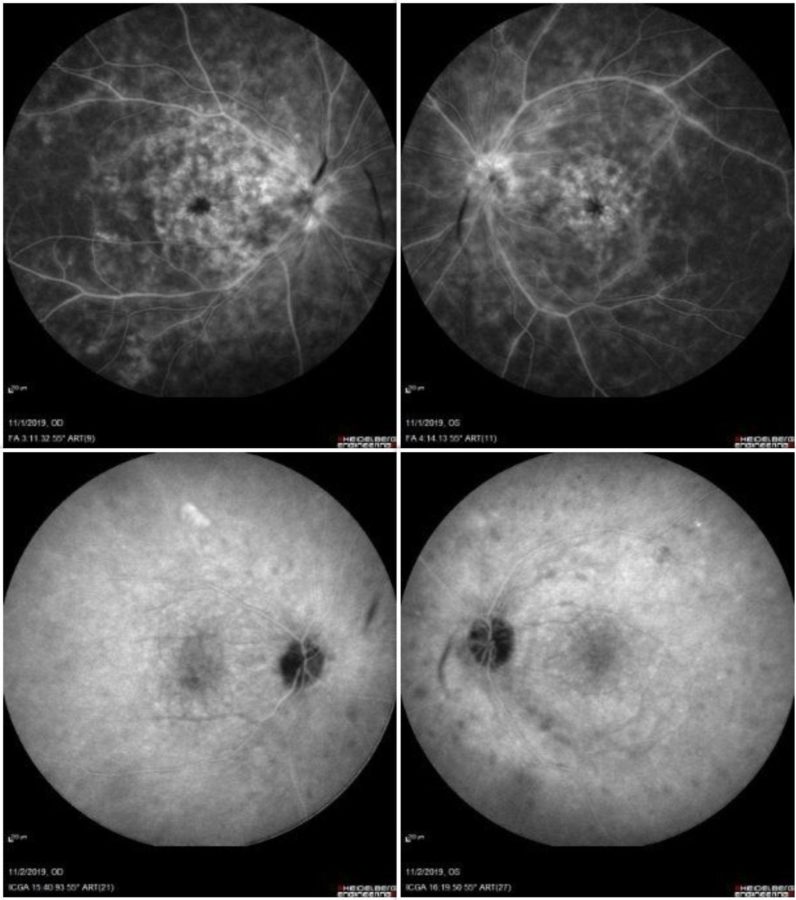 A complete laboratory workup was carried out, rendering a positive result for the HLA-A29 antigen, thus confirming the diagnosis of birdshot chorioretinopathy.

Baseline visual fields test (VFT) and 30 Hz flicker electroretinogram (ERG) were conducted and systemic therapy with methylprednisolone was initiated. Following 2 months of steroid treatment, despite functional and anatomical improvement, there was sustained vasculitis with residual macular edema in both eyes (Figure 3, 2nd line). Subcutaneous biweekly injections of adalimumab (monoclonal antibody which inactivates tumor necrosis factor-alpha) were added to the treatment regimen. One month later, there was complete resolution of the cystoid macular oedema (CMO) in the RE and presence of only minimal intraretinal fluid on the left (Figure 3, 3rd line).

Treatment with adalimumab was continued for 2 years, resulting in complete remission of inflammation and absence of CMO recurrence during the follow-up period. Patient’s visual acuity improved to 7/10 and 9/10 in the right and the left eye respectively and repeat VFT and 30 Hz flicker ERG confirmed clinical stability, allowing for tapering of the monoclonal antibody to monthly injections. 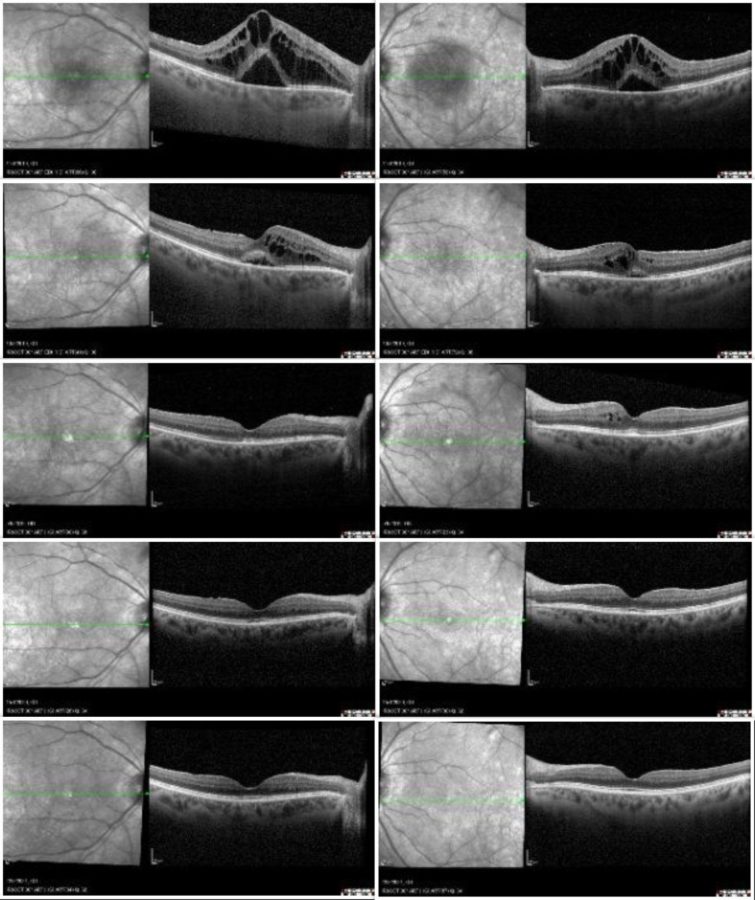 Birdshot chorioretinopathy (BCR) is one of the white dot syndromes, in which the common defining clinical feature is the presence of multiple white lesions located at the deeper levels of the retina and choroid. BCR is a rare (estimated 1 to 5 cases per 500,000) form of chronic, bilateral, probably autoimmune posterior uveitis with a distinguishing clinical phenotype and a strong association with HLA-A29. The disease predominantly affects middle-aged individuals (age 40 to 60 years), females more often than males, with an apparent predilection for those with Northern European Caucasian ancestry.

There is continuing debate as to whether BCR is primarily a disease of the choroid or the retina. BCR typically presents as a white, painless eye, with minimal anterior segment inflammation, but with vitritis, retinal vascular leakage, and cream-colored spots at the level of the retinal pigment epithelium (RPE) or deeper retinal layers. The indistinct appearance of the lesions, lack of associated RPE pigmentary changes, and the angiographic features of the lesions suggest that these lesions are located in the deep choroidal stroma and are associated with the choroidal veins. The retinal and choroidal changes are not necessarily concordant. Histological studies show massive infiltration of blood leukocytes, mostly T lymphocytes CD4 (“T helper” cells) and CD8 (“cytotoxic” T cells), at various levels of the choroid and retina layers, prelaminar optic nerve head, and surrounding retinal blood vessels, suggesting a primary disease of the choroid with secondary involvement of the retina.

Typically, the onset of visual symptoms involves one eye, but over time the other eye is also affected. Initial manifestations are mild, often resulting in delayed treatment and permanent ocular damage, particularly when visual acuity is not affected. Symptoms may be common to other white dot syndromes and include photopsia, floaters, decreased or blurred vision, in the early stages. Later symptoms include glare, photophobia, nyctalopia, metamorphopsia, dyschromatopsia, diminished contrast sensitivity, small scotomata, reduced peripheral vision, and decreased depth perception. Fundus examination reveals vitreous inflammation (in up to 83 % of cases) associated with multiple yellow-white, creamy, ovoid choroidal spots, initially observed inferior to the optic nerve head and radiating nasally. Lesions are usually 500 to 1500 micrometers in diameter, with a typical «birdshot» appearance and distribution: “cream-colored, irregular or elongated, with indistinct borders, the long axis of which is radial to the optic disk.” As the disease progresses, the lesions become more confluent and linear around the veins, eventually becoming more atrophic in appearance. There is no consistently associated systemic disease.

Multimodal imaging is cardinal not only for diagnosing but also for monitoring response to therapy and disease remission. Fluorescein angiography (FA) often reveals diffuse vasculitis and leaking from the optic nerve head and the macula. Indocyanine green angiography usually shows multiple hypofluorescent areas at the posterior pole and periphery, confirming choroidal stroma involvement. SD-OCT is useful in demonstrating macular edema, the leading cause of visual loss in patients with BCR. Enhanced depth imaging (EDI) OCT is a non-invasive imaging modality which provides detailed imaging of the choroid and allows accurate measurement of its thickness. Depending on the stage of the disease, choroidal thickness is either increased (in early disease) or decreased (in late, poorly controlled disease). Visual field assessment is a useful modality for monitoring disease activity and response to treatment in BCR, although extensive peripheral visual field deterioration may coexist with relatively well-preserved central visual acuity. Electroretinography is superior to visual field testing for evaluating disease activity and therapeutic response. Changes in the 30 Hz cone flicker implicit time are the most sensitive and consistently affected ERG parameter, making it an extremely valuable tool. Restoration of flickering implicit time is a common finding following disease improvement.

Over the years, a number of diagnostic criteria have been proposed for BCR. Essential criteria are (1) bilateral disease; (2) three or more characteristic birdshot lesions inferior or nasal to the disk in one eye; (3) low-grade anterior chamber inflammation (no more than 1+ cells in the anterior chamber on the SUN score); (4) low-grade vitreous inflammation (no more than 2+ on the NEI/SUN vitreous haze score).

Common causes of visual loss in BCR include those inherent to chorioretinopathy, such as refractory CME, choroidal neovascularization (CNV), epiretinal membrane (ERM) and macular scarring. Diffuse retinal dysfunction associated with the long duration of the disease is also recognized as a significant risk factor for vision loss.